Welcome to the second episode of the Creative Detour Podcast! In this episode I sit down with Georgia Maq of Camp Cope to talk about her creative journey.

Georgia Maq: I’ve got songs that I’ve just written and then just forgotten, they’re gone forever. There’s nothing I can do about it. It doesn’t bother me. I have like, I’ve got no control over it. So I’m just like, ugh, whatever. That’s how I feel about most things in life. You know, like if I can’t control it why worry about it? It doesn’t matter. I just think it would be like, I guess like when, when you can, you know, you can create something else.

Matt Walter: I guess it’s the same as like, I had a hard drive crash and I lost so many print resolution photos and I’m like, well, I can go back and do more tours and create more. But if I took a photo that was a fluke you’d feel so bad but you know, you just know that there’s more opportunities to do it. Whereas if you fluked it, if you somehow made a photo or a song and you didn’t do by trade, you’d be freaking out.

MW: Oh shit, I lost my proof that I can do this if I try. Whereas you can probably go create something else.

GM: Yeah. I just… I try not to let it bother me. Cause I feel like there’s, you know, there’s billions of fucking people in the world someone’s going to come up with that exact same thing. It doesn’t worry me. Like I feel like I expressed myself. I did what I wanted to do at the time. And if I don’t capitalise off it, that’s fine. That doesn’t matter. That’s like not the point. MW: But do you like in that vein, do you worry? Sometimes the song you’re coming up with is subconsciously the same as something that exists out there or do you just not worry?

GM: Oh my God. I worry about like quite a bit. I’m like, have I decided ripped off something that I heard… But, it’s like, everything’s been written, everything’s been done. Everything is just… you know… nothing’s original anymore. Everything’s already been done. So we’re all just kind of ripping each other off, but that’s okay. That’s just, fucking art. It still has value and meaning. Everyone’s just trying to make art, like let them, it’s how people express themselves. I’m not a purest about it.

MW: Well, I guess like that leads to a question that I’ve been curious about.  But one of the things like if you’re writing, what’s the difference between a Georgia Maq song or a Camp Cope song? For example, Song for Charlie or one of the Camp Cope album closing tracks versus a solo Georgia Maq song like Cold Summer where it’s still just you with the guitar. How do you know which is which?

GM: It just kind of happens. When we had the first Camp Cope album, I kind of didn’t really have that many songs. So I was just like, yeah, let’s just put whatever on the album. And it’s like, Song for Charlie couldn’t have been with anyone else. It couldn’t have been done with anyone else. But I have like this idea in my head of it being a full band song eventually, and they’d be like cutting down the verses, making it shorter. That has just hasn’t happened yet. I feel good about what I’m producing. I feel like I can produce things myself. In a really fun and cool way. Now I can kind of tell the difference a bit more between like Camp Cope songs and Georgia Maq songs. There’s just some songs that I’m just like, nah, it won’t make sense on this song and I want it to sound a certain way. And I just want to be able to be self-sustainable and then there’s some songs that are like, fuck, I don’t even know, Matt… Like, I don’t even know how… I’ve got this like one song that I’ve written… The first song that I’ve written since I’m seeing clairvoyant. And I’m like, is that a Camp Cope song? Is that a Georgia Maq song? I guess I’ll try it with Camp Cope. It doesn’t work with Camp Cope, then it’s a Georgia Maq song. Maybe I just won’t ever release it. Maybe I just keep it, but I like putting my art out into the world. That’s a nice thing to do. 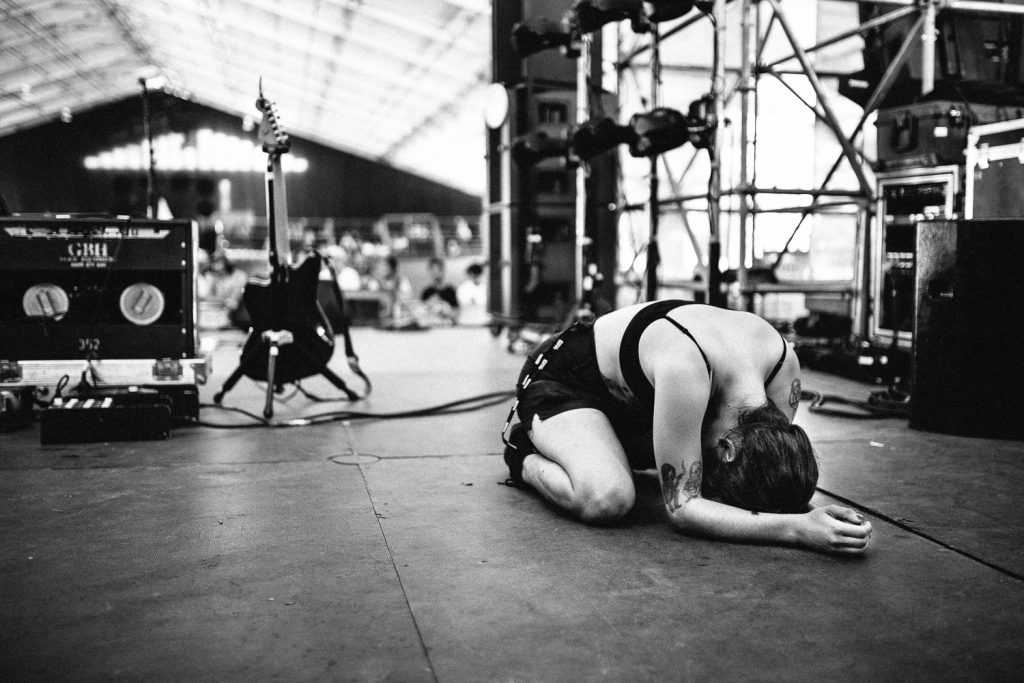 GM: Yeah, it can be. I’ve got so many records that I just have to admit. I’ve just been giving them away and selling them.

MW: You’re just offloading them? Is that like trying to be a minimalist or?

GM: I think I am. I just ripped out half my wardrobe and I took some to there’s these people who run a charity on Monday nights. It’s called Reaching Out in the Inner West. It’s pretty much just like giving free food and free clothes to people who need help. And so I took them a bunch of like old, big jackets that I had stuff that could be warm. Cause it’s getting a bit colder now and I’m going to give the rest to an indigenous women’s refuge.

GM: Cause I’m like, I can’t be bothered selling shit online. I’m just giving it away. I can afford to give it away. I don’t give a fuck. I stopped being so sentimental about a lot of things… maybe songs as well. I feel like I used to get kind of shitty at people on the internet assuming things about me, you know, and people assume a lot about me. That’s partially my fault. I put myself online. Sometimes I do dumb shit and put it on the internet.

MW: What’s the biggest misconception about you?

MW: Yeah. And it’s the same with ‘all cops are bastards’. Surely there’s a few cops that are good, but nine times out of 10…

GM: Yeah. It’s like, fuck the cops. Fuck the whole institution of policing. 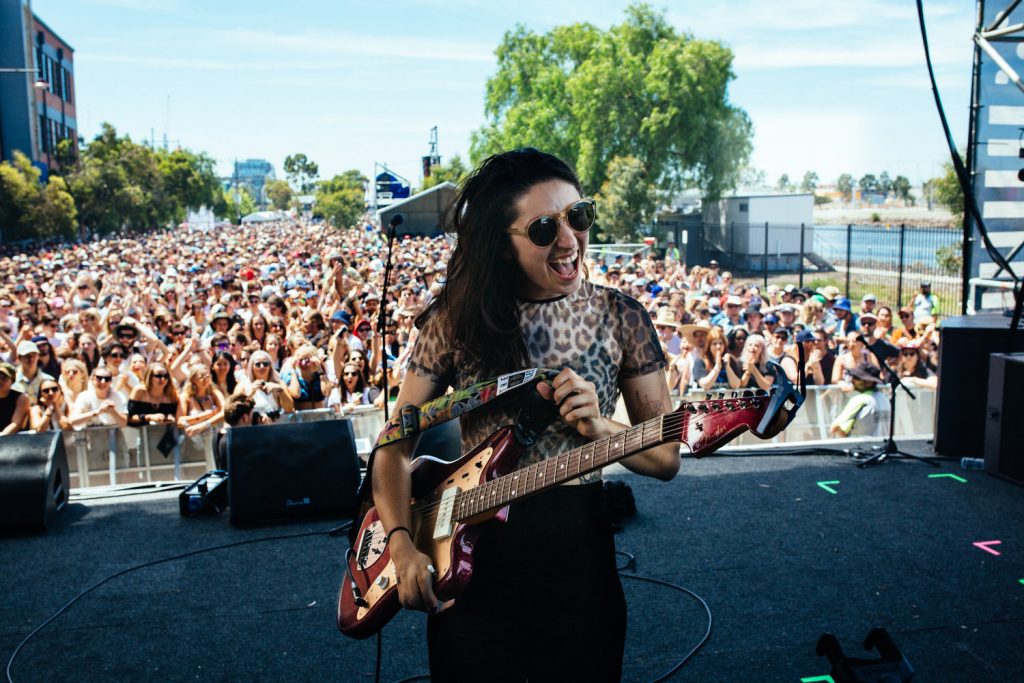 MW: Was there ever a time where you cared about that whole sort of the extreme writing you off as this man-hating person where you felt like it actually mattered to correct it? Or are you just like, ‘you don’t get it. That’s just how it is’.

GM: I feel like I’ve just kind of always been that way outwardly, but inwardly I’m like, ‘Oh my God, one person on the internet hates me. What have I done? Like, how do I make this one person like me?’ I feel like I am secretly I’m like that a bit sometimes. But then like, there’s this other part of me that I’m just like, who gives a fuck? You’re not going to please everyone. Not everyone is going to like you. If everyone liked you, you’d have to be the most fucking plain person on earth, you know?

MW: I’ve always known who you are as a very like balanced sort of person, but it’s like frustrated me at times because of how wrong people can be or… I dunno. I feel like when someone’s talking to me about you, they’re like, ‘Oh, you’re friends with Georgia Maq?’ and I’m like, ‘yeah, yeah’. Then they say, ‘Oh, is she is she really angry?’ and I say that you’re not at all. She laughs about fart jokes and stuff like everyone else.

GM: In the, in the last like few years, I feel like I’m not the same person I was even a month ago. I’m constantly learning and changing and learning to be deeply forgiving. I yell. I used to be really angry. Sometimes I was just playing in the wrong and that’s okay. I think admitting that kind of makes it okay. Because I’m still learning, you know, We’re all still learning. No one knows everything. I’m also kind of learning while people watch me learn. That can kind of be hard sometimes, but at the same time, I’m lucky to have other people’s opinions and have other people hold me accountable for things and have other people correct me when I’m wrong. Because they also know that everyone can grow and everyone can learn from stuff. A really big mistake that I made was getting angry at people. People don’t learn if you’re screaming in their face. Sometimes they do, but sometimes I think it’s not a very kind or productive thing to do. And so I think definitely in the last few years I’ve become more calm and like quiet. When something happens like… like this dude I know liked a picture of this other dude who has abused people and instead of calling him out like I probably would’ve done a few years ago. I just messaged him being like, ‘Hey, like this isn’t your fault at all. Like, you didn’t know this, like, this is just what happened. Like this doesn’t make you a bad person because you shared a picture around blah, blah, blah, blah, blah, blah’, all that kind of stuff. But I just had this really like nice conversation with this person about it. And they were like, ‘Thanks for letting me know, I definitely will, blah, blah, blah, blah, blah, blah’. You know, all that kind of stuff. And yeah, I feel like at this point in my life, I’m more accepting of people and I try to see the good in people. I still like hold onto that hope that, you know, People can change and people can be better cause no one wants to be bad. No one wants to be mad all the time and unhappy because I feel like that just kind of weighs you down, you know?

MW: I’m glad you can see yourself as the introspective person that I’ve known you to be. Whereas, and that’s one of the things that really frustrates me about being your friend. Is these people that just see an entertainment side of it, which is not to say that it’s not real, all the things that you do, but they see 2% of you. And they think that that is a 100% of you and that’s just not the case. 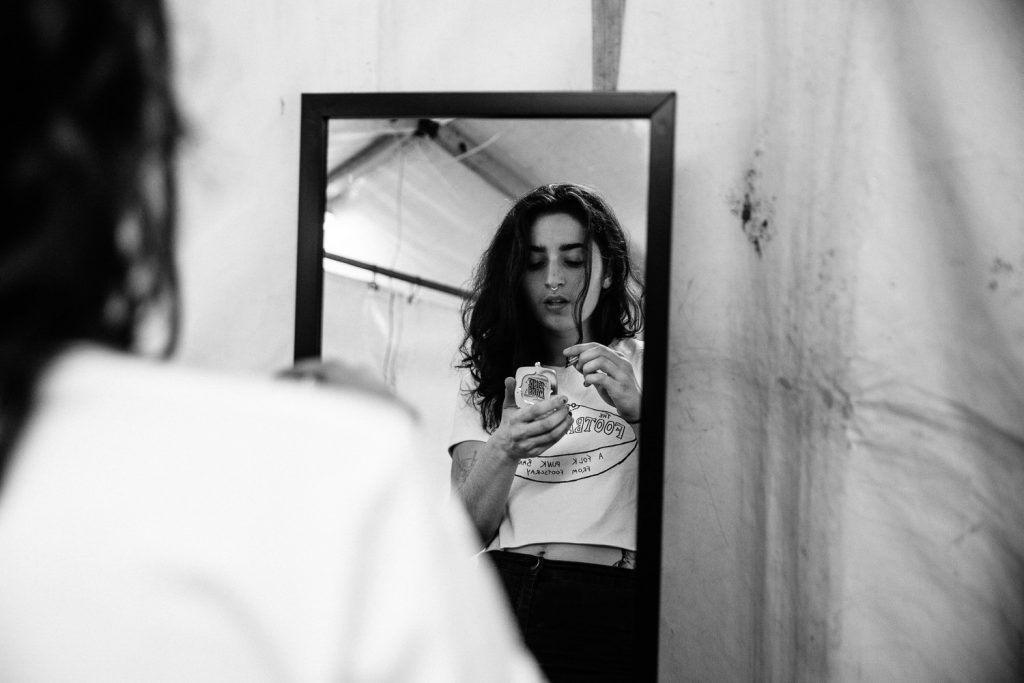 Listen to the full episode

Listen to the Creative Detour Podcast – honest conversations with creative people. Hear about how they made themselves into the success they are today.

About Georgia Maq and Camp Cope